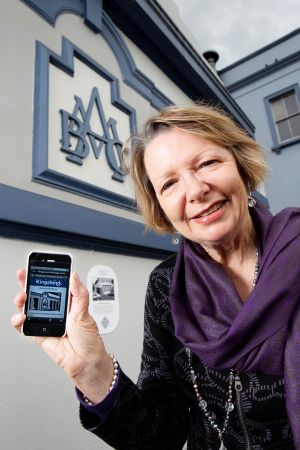 Kingsland's heritage buildings are even easier to spot these days, with the help of your phone.

The suburb's business society is trialling a series of plastic plaques featuring special bar codes on the area's historic buildings. Run your smartphone past the barcode and you can find out all about the building's history.

Kingsland Business Society general manager Christine Foley says the move is all part of a heritage project the society began in 2009 with the aim of highlighting buildings and the area's sporting and cultural history. Information came from a pamphlet written by former community board chair Lindsay Rea - as well as the Eden Park Trust and Auckland Library Special Collection.

The society had hoped to install hand-crafted bronze plaques in the footpath at 12 important sites, but Auckland Transport was concerned they could be removed or interfere with roadworks.

"The council's heritage team wanted us to use standard enamel plaques which were already in place at the Domain and Victoria Park instead. They're sturdy and can be attached to buildings," Mrs Foley says.

The society agreed, but added their own flavour. Web designer Gavan Hogg created the mobile website and codes while graphic artist Grant Levarre-Waters came up with the overall look.

"We approached building owners and asked for permission, they were all very enthusiastic."

The codes embedded in the plaques are known as Quick Response or QR codes. The technology was invented by Toyota in 1994 to track vehicles during the manufacturing process. Smartphone users can download a free app called a QR Reader that allows them to scan the code which instantly opens a website with information about the building.

Mrs Foley says the codes are already used on a walk at Wynyard Quarter but linked to a traditional website, designed for viewing on a PC.

"Unless the information is optimised for a cellphone it might not add that much because it's too hard to navigate. This is the first instance that we know of, of using QR codes on a heritage plaque where it links to a mobile site."

The phone-enhanced website works in tandem with the society's new website Kingslandnz.com, which went live in February.

"People can see how one of Auckland's earliest suburbs was established. Kingsland grew from the fact it had rail and tram services," Mrs Foley says.

The heritage walk takes about 40 minutes and starts at Trinity Church on the corner of Sandringham and New North roads. It finishes at the site of the 1903 Kingsland Tram Disaster at Bond St. The disaster saw three people die and 50 injured when the handbrake failed on a crowded double-decker tram. You can read all about it, of course, with the click of an app.

The Auckland suburb of Kingsland is combining vintage with a vision for the future, testing out specially-designed heritage QR codes on some of its most historic buildings as part of a plan to create a heritage trail.

Smartphone users can scan the codes and go straight to a dedicated mobile website that gives instant access to information about the building in front of them. The project is the work of a team of Kingsland creatives and Kingsland Business Society manager Christine Foley says the project is attracting a lot of attention.

In association with Alternate Instinct and design company Virtual Eyes, Kingsland has plans to establish a heritage trail supported by QR codes for 12 locations.

Kingsland QR codes heritage trail"As far as we know, no one else in the world is linking QR codes on a heritage trail to a dedicated mobile website and we are expecting interest from both Kiwi and international heritage projects." 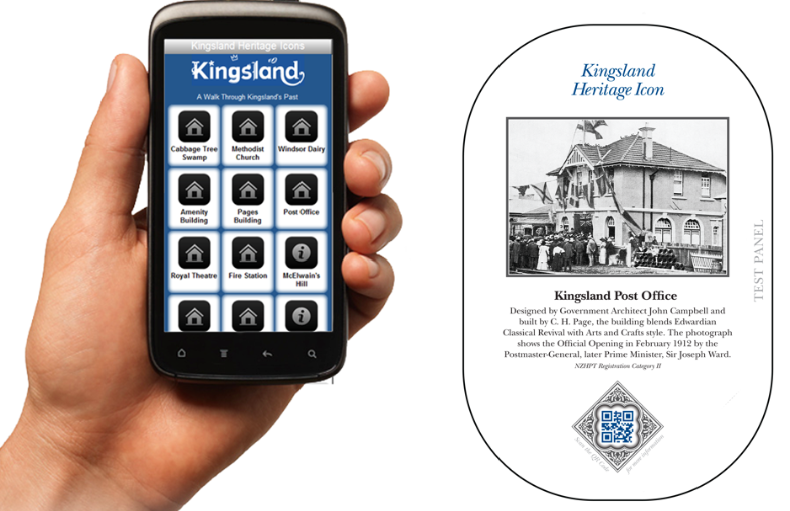 Plaques containing the QR codes and some written information have gone up on seven Kingsland buildings this week including the Old Post Office, Pages Building and the 1928 art deco public toilets (complete with modern conveniences).

Graphic artist Grant Levarre-Waters of Virtual Eyes, who worked on the Pages Building heritage plaque, says it was exciting to blend print and interactive media. "And making the QR code look part of a graphic as opposed to a cheap little sticker made it a lot more fun. The branding felt right." Old photographs were enhanced and cleaned up, then QR codes were given a little flair and colour, and overall design panels created.
It was "great fun" playing with historical images, he says – "once you go back about 100 years all the photography is fantastic, super high quality" – compared to recent years when anyone and everyone can snap shots on a camera or small point-and-shoot.
Levarre-Waters says the current plastic panels are temporary, to get locals used to the look, before the council puts up permanent plinths. And that was another challenge, creating an aesthetic that maintained the community brand – one that wasn't overly trendy but would endure over the years.